Golden Software has been located in Golden, Colorado since its founding in March, 1983. It was the brainchild of Dan Smith, who was at that time a graduate student in the Mining Department at the Colorado School of Mines, and of Patrick Madison, a CSM Computer Science Instructor. At that time, personal computers were new and their applications were limited. Mapping applications required mainframe computers and pen plotters.

Together, Dan and Pat developed a printer language that operated on a PC and required only a dot matrix printer. Their program (PlotCall) also offered a dramatic improvement on the level of resolution available in a computer-generated map: most graphics programs of the time produced printouts that were based on "screen dumps." This limited the resolution to about 24 dpi. PlotCall, on the other hand, offered the full resolution of the installed printer—usually 200 dpi resolution (a breakthrough at the time).

As hardware and software technology improved, Golden Software's products evolved and remained at the leading edge of scientific graphics software. Surfer was the company's first program to take advantage of technological advances, in 1985. Grapher followed, in 1986, providing users with graphing capabilities previously possible only through manual methods. MapViewer was introduced in 1990, Didger in 1996, Strater in 2004, and Voxler in 2006.

Today, Golden Software has grown to be the leading provider of scientific graphics software in the world. Customers include researchers in mining, engineering, and medicine, as well as thousands of applied scientists and engineers. Golden Software has sold over 100 000 software licenses to date, and their products are in use in 179 countries and on all seven continents! 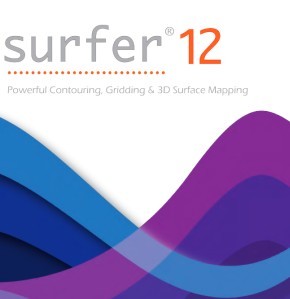 An efficient and powerful graphing program

Take Your Data to New Heights

Grapher is the only graphing program you will ever need. Create powerful stunning graphs quickly and efficiently. Ideal for scientists, engineers, and business professionals.

Grapher is the ultimate technical graphing package available. This easy-to-use, powerful, dynamic program will help you create superior publication-quality professional graphs in minutes! Wow your audience every time they see your graphs. 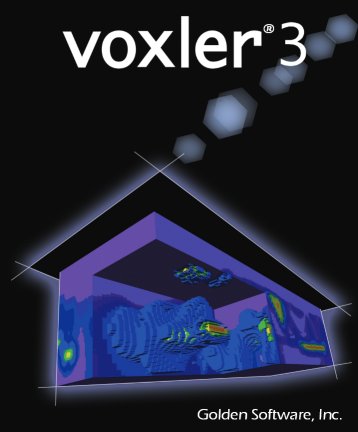 Create powerful, fast, customized 3D images and 3D models of your geologic data and point cloud data with Voxler 3. Easily import and combine data in a multitude of file formats to create stunning 3D models that visualize the relationships across your data set. This robust, yet user-friendly application gives you the power to display your data in a variety of formats and colors, model wells and boreholes in 3D, map surfaces in full 3D, capture video animation of your moving model, and select from several image and data export options to create stunning project and graphics.

Explore the world of 3D well and surface visualization with Voxler! Voxler is the leader in 3D well modeling, 3D geological data visualization, and 3D surface mapping; taking your raw, complex data and seamlessly modeling it into a rich, interactive, user-friendly 3D visual environment that produces great results for scientists and major stakeholders alike. The updated, easy-to-understand user interface allows you to quickly combine, visualize, and examine the depths of your data in true 3D space. With robust data compatibility, importing data into Voxler is fast and easy. You can filter anomalies, duplicates, or areas you want eliminated. Interactively manipulate your data while viewing the results, and personalize Voxler with a multitude of settings. 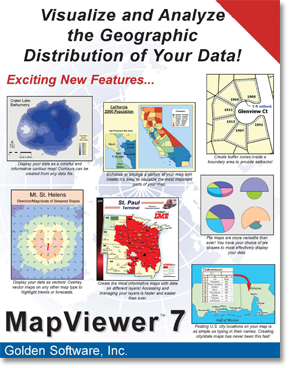 MapViewer is an affordable mapping and spatial analysis tool that allows you to easily produce publication-quality thematic maps. Precisely display your data distribution with the most intuitive functions and features. Your data is unique and you need the best mapping software for the job!

Create one of 15 different 2D and 3D map types including: contour, density, prism, flow, territory, vector, gradient and many more! 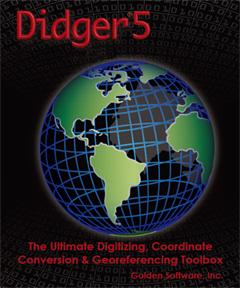 All the advanced georeferencing, digitizing, coordinate conversion, and mapping features you need in a low-cost, unbelievably versatile program. This is the ultimate geoprocessing and data conversion tool for any map maker, cartographer, geologist, oil and gas professional, or GIS analyst.

There has never been a more comprehensive, powerful, all-in-one data conversion software solution that provides an easy-to-use and intuitive user interface for digitizing, georeferencing, coordinate reprojection, tiling, and creating image mosaics. Didger solves the problem of combining data files in different file formats and in different coordinate systems, by providing extensive tools to transform your GIS data into one cohesive coordinate system. You can use Didger to precisely convert paper maps, graphs, aerial photographs, well logs, or any other plotted information into a versatile digital format that you can use with other software. Didger can create new maps from the ground up or edit any existing map, drawing, image, or data set imported into it. 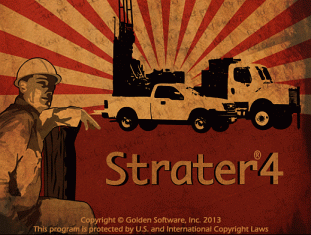 Strater is a powerful and innovative well log, borehole and cross section plotting software package for geoscientists. With its modern and easy-to-use user interface, Strater is so straightforward even a beginner can create high-quality professional representations of subsurface data in no time.

Strater is compatible with all popular data formats, and can graphically display the data in fourteen fully customizable log types. Maps and cross sections are just a click away. All aspects of your design are easily changeable by simply clicking on it and updating its properties. Batch print or export all your hole data, and save your project file to a template to make log creation efficient and consistent for future projects.